The human race is a proud one. We are always adapting and evolving, boasting of our advances in medicine, technology, exploration, and so on. And I agree, we should be proud, we have done the “impossible” countless times. But, that pride sometimes blinds us from the negative impact we have on our environment. We forget, or even choose to neglect the fact that we are not alone in this little blue planet, we have to share it with countless other life forms. Plenty of times, our actions are extremely beneficial to us, sometimes just a little, but no matter what we must always keep in mind that in order to maintain Earth as beautiful as it is, we must also care for our environment, and the wildlife that inhabit it. It is with pride that I share with you some of the stories of the people out there who are using our gift of brilliance to ensure that the future generations can appreciate nature just as much as we do. 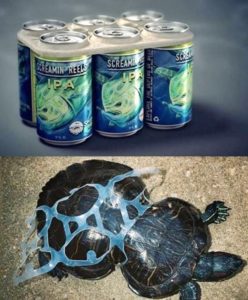 Not too long ago, I came across an imagine of a turtle who became entrapped in a plastic six-pack ring. The turtle was young when this happened, so as it got older and bigger, the ring became tighter and tighter, to the point where its shell and body took the form of the ring. This turtle had been suffocated its entire life, and it only became increasingly more painful as it got older. Now, this is an extremely high price to pay considering all the steps that could’ve been taken on preventing that six-pack ring from getting to our oceans. Unfortunately, there is no clear cut solution to completely end pollution as we cannot control the actions of others. Luckily, I was not the only one affected by this image. Saltwater Brewery, a small brewing company based of Delray Beach, Fla., came up with an ingenious solution that turned something so negative into something that is actually beneficial to marine life. So what did they do? They simply used the excess barley and wheat from their brewing process, and used that to make an 100% biodegradable and edible six-pack ring. Now, its actions like these that really give me hope in humanity. We get so caught up in trying to make our lives simpler and more enjoyable that we become ignorant of all the side effects of our actions. But, as Saltwater Brewery has proven, making a positive change isn’t hard and they may have gotten a lot of good publicity from this, but deep down I still like to think that the most rewarding thought to them, is that at the end of the day they know they are saving lives. 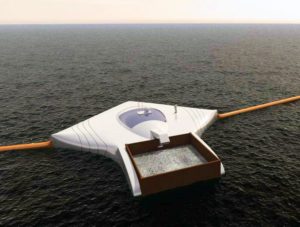 Boyan Slat, has come up with a plan that could potentially eliminate 7,250,000 tons of plastic waste from our oceans, and the most impressive part, Boyan is only 19!

Slat is the founder of The Ocean Cleanup Foundation, a non-profit organization which will be the entity developing his proposed ocean clean up technologies. His idea has the potential of saving hundreds of thousands of marine life per year. It is also designed to eliminate pollutants such as PCB and DDT from the aquatic food chain. If that wasn’t enough, this array could also save millions of dollars per year in ocean clean-up costs.

Unfortunately, the Array is still currently under development, and the ocean clean-up process itself is estimated to take about five years to complete. Still, it is actions like these that raise awareness and inspire others to do what is within their power in making our planet just a little bit of better place to live in.

Fenced In: How to use silt fence

Turbidity Measurements – What do they mean?

Turbidity, simply put, is the measure of cloudiness in a liquid. For our purposes, this…

Don’t Stink Up Your Construction Site!