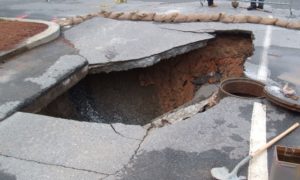 Florida is known for having more sinkholes than any other state. A sinkhole is defined as a cavity in the ground caused by water erosion, which provides a route for water to disappear in to the ground. The peninsula is lined with a base layer composed of mostly limestone, a porous rock that is gradually dissolved by freshwater. Because of this, sinkholes are prevalent in this part of the United States.

These cavities in the ground come in various sizes and depths. Some are more dangerous than others. Here are some warning signs to help you determine whether a sinkhole is forming:

1. New levels of fence posts, trees, and foundation are exposed
2. Doors and windows that do not close properly
3. Slanting or sagging objects such as signs and trees
4. Turbid water in nearby wells
5. Small ponds forming and collecting water that did not exist before
6. Wilting of small, circular areas of vegetation
7. Cracks in walls or ground surfaces such as floors and pavement

Although natural areas may have Mother Nature’s idea of the best drainage system, the natural…

How to Protect your Stream

When planning any kind of construction or industrial activity, it is important to consider the…