The popular perception of a wetland as a swamp has gone the way of the dinosaur, and many people now understand the immense value wetlands have to offer. Natural wetlands have been referred to as “earth’s kidneys” because of their ability to remove toxins and pollutants from the water. Humans use some natural wetlands for their water-cleansing properties, but also create Constructed Wetlands that can perform the same treatment function while providing a new habitat for wildlife. 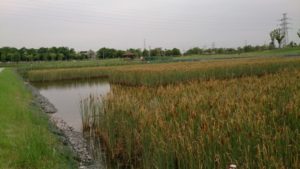 Treatment wetlands can filter pollutants from water by slowing the water’s flow and allowing any solid particles being carried along to settle out. Generally, pollutants of concern are transported by sticking to sediment as it is carried along a water system, so the ability to slow down the flow and allow sediment to settle out is particularly important. In addition, nutrients that are often regulated in water bodies by Total Maximum Daily Loads (TMDLs) can be broken down by microorganisms into forms that are used by plants in the wetland. 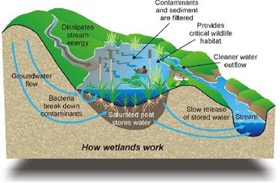 Constructed wetlands are usually built in existing uplands to prevent any harm to natural wetlands. The site will then be excavated, backfilled, and graded. If the natural soil is very permeable, like in much of Florida, a clay layer can be added as a liner. Finally, wetland plant species can be planted at the site and then allowed to establish in a natural pattern. 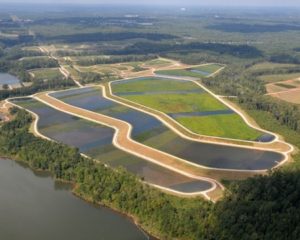 Here in Florida we have quite a few constructed wetlands designed for treating wastewater. The Orlando Easterly Wetlands is made up of more than 1,200 acres of man-made wetlands and is permitted to handle 35 million gallons of waste water a day. The City of Lakeland also has a massive treatment wetland, consisting of 1,400 acres of land and permitted to treat 14 million gallons a day. These creative means of treating wastewater can help lessen the load on industrial water treatment facilities at a fraction of the cost, all while providing a habitat for native wildlife and a spot for residents to enjoy recreationally! For more information on the role of treatment wetlands in Florida, you can visit here.

How to Protect your Stream

When planning any kind of construction or industrial activity, it is important to consider the…

Wetlands serve an important purpose for our natural environment. Wetlands can serve a variety of…