A sinkhole is a cavity that opens up from underground through to the surface, usually occurring in limestone bedrock. They can vary in size from tiny holes barely big enough to engulf your foot, to large enough to swallow cars, houses, or highways. Florida is notorious for having sinkholes open up, causing destruction to houses and properties in the surrounding area.  The recent hurricane that ravaged the area probably hasn’t helped, as the heavy rain and flooding has been attributed to helping sinkholes occur. 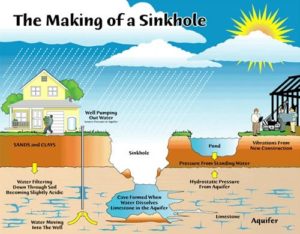 Sinkholes are formed when the underlying limestone layer is eroded. This erosion can occur during times of excessive rain or even reduced rain. Excessive rain may cause an existing limestone cavity to collapse due to the weight distributed along its top. Conditions of reduced rain can cause sinkholes by decreasing the buoyancy of the limestone cavity, resulting in cracks. Together, the ebb and flow of rainwater in and out of the cavities can also reduce the stability of the limestone layer.

The earth’s surface is in constant change produced by natural occurrences such as rainfall or man-made activities. Developments such as retention ponds, buildings and vibrations from drilling increase the load on earth’s layers and attribute to the formation of sinkholes. 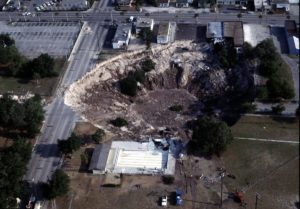 Unfortunately, there isn’t much we can do to stop a sinkhole. There are a couple things to keep in mind on site to maybe reduce the chances that one will form in the future, however. Prior to construction, excavating and compaction may be conducted to alleviate the formation of sinkholes in an area. This may be something to consider in areas that may be especially prone to sinkholes.

Keeping the pests out of Stormwater

One often overlooked part of stormwater management is human health and prosperity. We may not…

Tis the Season to be Jolly…..

December is a time of joy, celebration, and reflection.  KCI had an awesome 2017, and…

Put a wrap on your slopes with riprap!

It goes by many other names; shot rock, rubble, rock armor, but it all serves…